Skip to content
First, I want to give you a better idea of where we’re working. 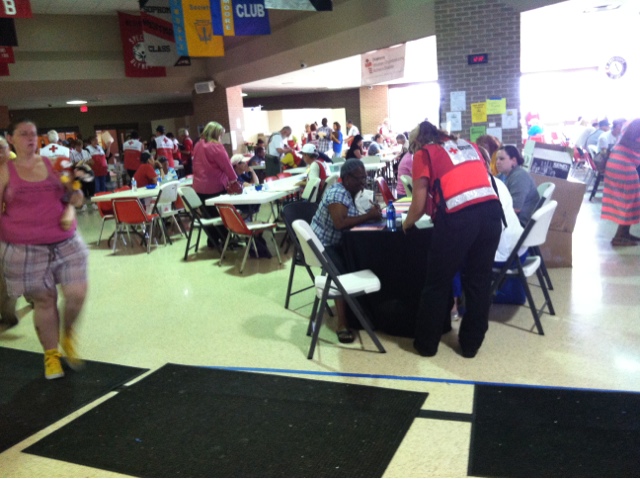 This high school has become the main hub for all things-disaster. Besides the Red Cross and FEMA, there’s every other imaginable disaster service and some insurance companies here too. Anyone in the area who has suffered any type of loss/damage from the tornadoes and the flooding is directed to come here. They have had anywhere from 400-500 people a day and it often takes hours if not several days for the families to get things figured out with all the available services.

Often, Children’s Disaster Services sets up inside shelters to provide child-centered play for kids living there. But it sounds like they had few children at shelters during this disaster for various reasons. Every disaster is completely different.
So, CDS has been here in the high school since the first few days. The first CDS team finished their two weeks and my team has taken over.  We had more kids than we could handle and a waiting list the first few days and now we’ve been seeing a steady decline in the numbers of kids coming (which is a good thing of course!). But right now we still have plenty of kids and of course quality is always more important than quantity!
On to the fun stuff… The kids were very verbal today during their expressive play, describing their experiences with the tornado and their feelings and fears. They lead the play, as usual, and it ended up being a day full of demolition and lots of re-building. This little girl was building “my house” as she put it. She worked on it very intently and seriously and when she was done she wanted me to take a picture of it all done: See, now it has a completed roof!  This same type of play continued throughout the day spontaneously with several children. We also found some more huge cardboard boxes in the afternoon and each kid who wanted could “build” their own house out of the box. (I’m not sure who had more fun with this, me or the kids!).
Here I am trying to get in (wish I was smaller!) while a boy is still perfecting the window: Then, they played out the tornado scene on their own initiative and this is what was left: I have to smile because I know how healthy this play and processing is for them.

I’m looking forward to what we end up doing tomorrow!!
Loving every minute.
**Thanks goes to Patty Henry for taking and sharing some of her pictures!
Click to rate this resource!
[Total: 0 Average: 0]
0 0 votes
Article Rating
Subscribe
Login
0 Comments
Inline Feedbacks
View all comments